SSC MTS 2022 Notification Out: The Staff Service Commission has released SSC MTS 2022 Notification on 22nd March 2022 on its official website @ssc.nic.in. SSC has announced SSC MTS Recruitment 2022 for Multi Tasking Staff and Havaldar in CBIC and CBN. As per the SSC MTS notification, 3603 vacancies for Havaldar in CBIC and CBN has been announced and the vacancies for Multi Tasking Staff posts will be intimated later on by the commission. The candidates who are preparing for SSC MTS 2022 have to submit their online application form at www.ssc.nic.in from 22nd March 2022 to 30th April 2022. Go through the complete article to know every detail about SSC MTS 2022.

The SSC MTS 2022 Exam for Multi Tasking Staff will be conducted in 2 phases i.e. SSC MTS Tier-1, and SSC MTS Tier-2 however for SSC MTS Havaldar there would be a PET & PST after Tier-1 Exam.  The overview table below shows all the important points regarding SSC MTS 2022.

The SSC has released the SSC Calendar 2022 for the exam conducted by the SSC. The SSC MTS 2022 notification has been released on 22nd March 2022 and the SSC MTS Tier-1 Exam is scheduled for July 2022. The important dates regarding SSC MTS 2022 are given below.

The official notification for the SSC MTS 2022 has been published on 22nd March 2022 on the official website @ssc.nic. Till then, candidates can go through the detailed advertisement of SSC MTS 2022 from the below link for a better understanding of the eligibility criteria, exam pattern, syllabus, and other details. 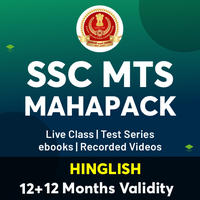 SSC has announced 3603 vacancies for Havaldar in CBIC and CBN posts for which a detailed breakup has been tabulated below. For SSC MTS 2022, the number of vacancies for Multi Tasking Staff will be announced by SSC later on.

Last year, 7099 vacancies were released for Age Group 18-25 & 18-27. The candidates can check the previous year’s vacancy from the table given below.

A candidate is required to be

MTS has vacancies in two age groups. Check both age groups below:

Apart from the mentioned Age Requirement, candidates belonging to reserved categories are given age relaxation as per Government Rules.

The SSC MTS Selection Process is a two-stage procedure.

Paper-1 is an online exam that is an objective multiple choice question type.
Paper-2 is a pen and paper mode of examination that includes writing a short essay or letter in English or
any language is included in the VIII Schedule of the Constitution.

Paper-II will only be of qualifying nature and is intended to test elementary language skills. Paper-II will be held only for those candidates who meet the cut-off prescribed by the Commission in Paper-I for different categories.

Paper-II is only qualifying in nature. However, marks scored by the candidates in Paper-II will be used to decide merit in case more than one candidate score equal normalized marks in Paper-I.

The paper pattern for SSC MTS saw a change in the previous year’s session of the exam.

SSC MTS Paper-II will be held only for those candidates who meet the cut-off prescribed by the Commission in Paper-I for different categories.

Followings are the PETand PST standards for the post of Havaldar in CBIC and CBN as mentioned in SSC MTS Notification 2022.

The candidates should be well-prepared with the updated exam pattern to qualify for the exam with good marks. Here are the topics to be covered in both Paper-1 and 2 for SSC MTS 2022.

SSC MTS Syllabus For Paper I

SSC MTS Paper 1 will have the following sections:

Let’s have a look at the detailed SSC MTS 2022 Syllabus For Paper 1:

SSC MTS Paper 2 is intended to test elementary language skills because of the categorization of the post as Group-C and view of job requirements.

Paper-II is only qualifying in nature. However, marks scored by the candidates in Paper-II will be used to decide merit in case more than one candidate score equal normalized marks in Paper-I.

The cut-off for SSC MTS 2022 will be declared once the examination for the same is conducted and the result has been declared. There will be separate category-wise, State/ UT-wise cut-offs in Paper-I. The commission may fix the separate cut-off for different age groups viz., 18 to 25 years and (ii) 18 to 27 years. The cut-off will depend upon the level of difficulty of the SSC MTS 2022 Exam as well as the number of candidates appearing for the exam.
Here is the cutoff of the previous year for reference-

SSC categorizes SSC MTS salary structure based on the type of city or location where the personnel is posted. There are 3 categories of cities- X, Y, and Z. The breakup of SSC MTS salary comprising of pay scale and allowances are provided in the following table:

Q1. When was the SSC MTS 2022 Notification released?

Ans. SSC MTS Paper I will be conducted online while Paper II will be Pen and Paper Mode.

Q6. What is the education qualification to apply for SSC MTS?

Ans. Candidates will have to be 10th Pass or equivalent from a recognized board.

Q7. Can I apply for other states other than my domicile state?

Ans. Yes, you can apply to other states.